Published by SallyKilpatrick on October 5, 2016 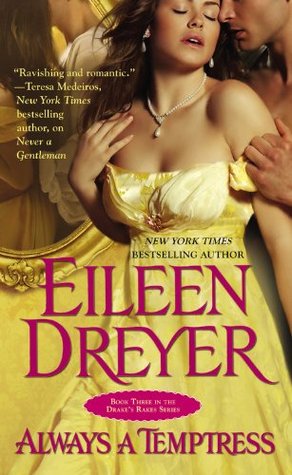 Whoopsie! Not only did I have the wrong date, but I also chose the wrong book. There’s a metaphor for 2016 somewhere in there. Okay, let’s focus. Now you’re going to pretend that it’s July 20, 2016. You’re also going to pretend that I read these books in the proper order. Let’s say I read this book back in July instead of finishing it, oh, yesterday, shall we? Without further ado, my award winner/nominee for the #TBRChallenge is Always a Temptress.

Once I finished Never a Gentleman, I had to keep going along because the heroine of Always a Temptress is the unflappable Kate. Only, it turns out that she’s far more, er, flappable than you might think. For the past few books, we’ve known that she and Army Major Harry Lidge had a falling out in the past, but we didn’t know what it was. We like Kate. We like Harry. Why can’t they like each other?

Well. As it turns out, there’s been some betrayal going on, and Kate is far more delicate than we would’ve ever guessed. Bonus? I pictured Prince Harry as the character Harry because….that’s the magic of books.

Again, this one is of the darker variety. Kate’s back story isn’t for the faint of heart. Harry’s suffering PTSD from Waterloo, among other battles. Someone still wants to assassinate Wellington and Prinny, and, hey, they’re also after Kate. Grace returns to this story and Bea gets an even larger role.

I’ve said it before, Dreyer makes you really care about her characters. I might’ve got lost a time or two in the verse conundrum, but it all works out in the end, and the characters have internal as well as external conflict. Scads of conflict. So, there you go, it’s an Eileen Dreyer sort of #TBRChallenge!